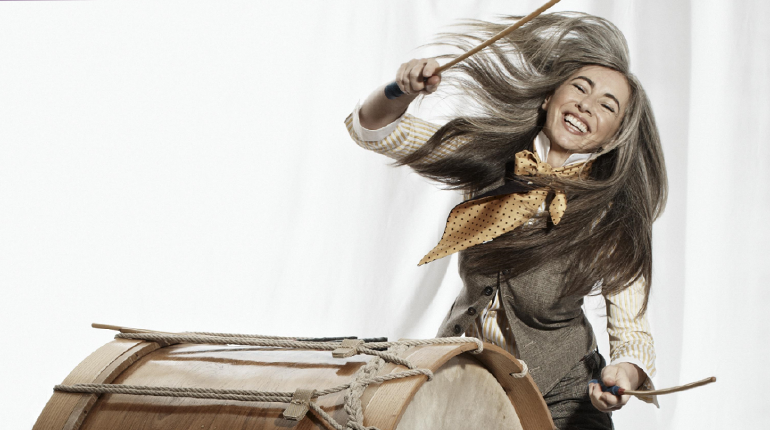 Evelyn has commissioned one hundred and fifty new works for solo percussion from many of the world’s most eminent composers and also composes and records music for film and television.  Her first high quality drama produced a score so original she was nominated for a British Academy of Film and Television Arts awards (BAFTAs); the UK equivalent of the Oscars. Evelyn’s recording career has been as illustrious as her performing and composing career

Dame Evelyn Glennie DBE Evelyn is the first person in musical history to successfully create and sustain a full-time career as a solo percussionist.  As one of the most eclectic and innovative musicians on the scene today she is constantly redefining the goals and expectations of percussion. By combining superb technique, a profound appreciation of the visual and her astonishing musicality, Evelyn creates performances of such vitality that they almost constitute a new type of performance. Evelyn gives more than 100 performances a year worldwide, performing with the greatest conductors, orchestras, and artists.  For the first ten years of her career virtually every performance she gave was in some way a first – the first time an orchestra had performed with a percussion soloist, the first solo percussion performance at a venue or festival or the world premiere of a new piece.  Her diversity of collaborations have included performances with artists such as Nana Vasoncelos, Kodo, Bela Fleck, Bjork, Bobby McFerrin, Emmanuel Ax, Sting, The King’s Singers, Mormon Tabernacle Choir and Fred Frith.

Music isn’t all about leaving the audience wanting more. It’s also about making them think and giving them an experience

Evelyn’s first CD, a recording of Bartok’s Sonata for two Pianos and Percussion, won her a Grammy in 1988.  A further two Grammy nominations followed, one of which she won in 2002 for a collaboration with Bela Fleck for Sony Classical.  Evelyn’s twelfth solo CD, Shadow Behind the Iron Sun (BMG Records), was based on a radical concept and has once again questioned people’s expectations.  Despite working a relentless schedule Evelyn is in constant demand to release new recordings, twenty five so far.

Outside of actual performance the Evelyn Glennie brand is constantly exploring other areas of creativity, such as writing a best selling autobiography (Good Vibrations), collaborating with the renowned film director Thomas Riedelsheimer on a film called Touch the Sound, presenting two series of her own television programmes (Soundbites) for the BBC, and making regular appearances on television across the world, including The David Letterman Show (USA), Sesame Street (USA), The South Bank Show (UK), presenting and performing on Songs of Praise (UK), Commonwealth Games Festival Concert, This is Your Life (UK), 60 minutes (USA), PBS Profile (USA) and many more. Evelyn’s activities also include lobbying the Government on political issues; her consortium with Sir James Galway, Julian Lloyd Webber and the late Michael Kamen successfully led to the government providing £332 million towards music education.  Other aspects include Evelyn Glennie Images which supplies photographs from a vast image library of Evelyn, Evelyn Glennie Jewellery, which is a range of jewellery designed in conjunction with Ortak and based on her influences as a solo percussionist and Evelyn Glennie Merchandise.  Evelyn is also an international motivational speaker to many diverse corporate companies and events.  Evelyn also performs with orchestras on the Great Highland Bagpipes. After 20 years in the music business Evelyn has begun teaching privately, which allows her to explore the art of teaching and to explore the world of sound therapy as a means of communication. In 1993 Evelyn was awarded the OBE (Officer of the British Empire), extended in 2007 to ‘Dame Commander’ for her services to music, and to date she has received over eighty international awards.  She is brimming with ideas to improve the experience for the audience and continues to redefine the very format of live performance itself.